I'm a huge supporter of La Palapa. I've been rocking with them since they were located a little further down Carson Street and we even stopped by last year for a magical happy hour.

I was overjoyed to hear that they were hosting a new Monday night event featuring all you can eat tacos and some of the best DJs in town. For $10 you seriously get entertainment and unlimited tacos. Certainly there is no better time to be alive. (They also rock $3.50 Coronas and $6.00 Margaritas for taco night.) You may purchase tickets in advance or pay at the door.

So the taco selection changes monthly and one taco changes weekly. The selection features one meat, one vegetarian and one special taco. The event is so new that I cannot really give you much guidance on what to expect other than when I visited the options were chicken, pork, and bean and mushroom. They will only allow you to order three tacos at a time.

I had one of each and really enjoyed all of them. My only complaint was that they are placing a lining of rice in each taco, presumably to help keep their costs within a reasonable margin. After all,  they can't possibly be making money by offering unlimited tacos for $10.

Instead of rice they should just give guests the option of lettuce, tomatoes and onions or serve tacos that are a little less filled. I like a bit more roughage in my tacos and I don't think it would significantly affect their margins to give us some vegetables.


I only managed to eat three tacos so they probably made money on my ass or at least broke even. My friend Eric went for five, I think he regretted his decision. 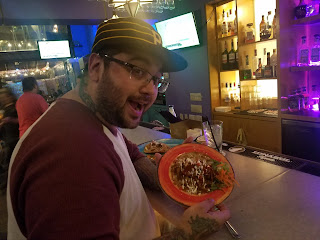 This is TJ, he is your host for this event and also a great dude. I saw him eat four tacos, what a badass.

Now when it comes to taco strategy, TJ had a solid theory. He mentioned that patrons are ordering their tacos sans shells in order to really capitalize on protein. Bold move folks! Maybe those people are the reason we are getting rice in our tacos. (Jerks.)

Possibly the best part of unlimited taco night, SICK DJs!!! This is Tom, he's a pretty cool dude. Overall, this is one of the best events taking place in Pittsburgh on Monday nights. I highly recommend stopping by.

Posted by Pittsburgh HappyHour at 6:09 AM