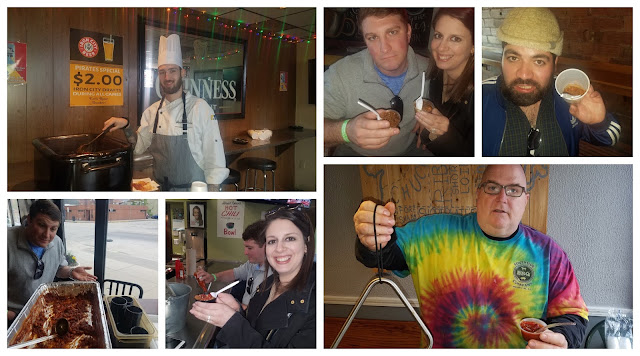 Since I know you ingrates are only here to read the rankings and then disagree with me even though you didn't try any of the chili, I've placed the rankings at the top of this post. Please continue below to read my notes on each chili and my thoughts on the first annual South Side Chili Cook-Off. Overall, it was a great time!

Here are the rankings you ungrateful cretins. 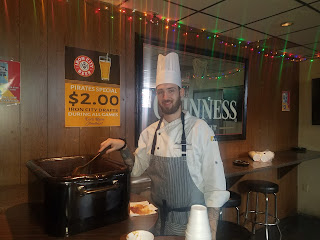 So chef Steven was described to me as a traveling chef. He explained that in the past he had worked as an executive chef for Garth Brooks, among a number of other different celebs.

His chili was phenomenal. Top finest, best in show. For my money, it could have had less beans. However, he still managed to best every goon in the South Side in terms of chili quality. It is not good for our neighborhood that an outsider won the competition, but such is life.

Chef used hot sausage, ground beef and pineapple to make a remarkable chili that really stood apart from the rest. Apparently Gina, the owner of the White Eagle, is a second mother to him. What a beautiful world. 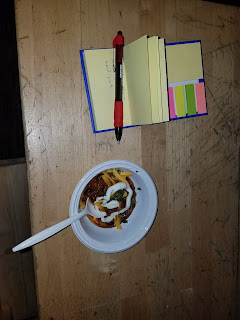 Smiling Moose consistently puts out some of the best food in the South Side.  I'm always impressed that a bar that has so much going on in terms of live entertainment finds the time to put together such good food. The chef called their chili WOW chili because it makes you say WOW. It was a mixture of beef and pork with a tequila lime sour cream and a very sweet and tangy flavor profile. It had a really fantastic flavor profile, but I could not rank it number one as it was too sweet for my liking. (I understand though chef, you have to cook for the public!) 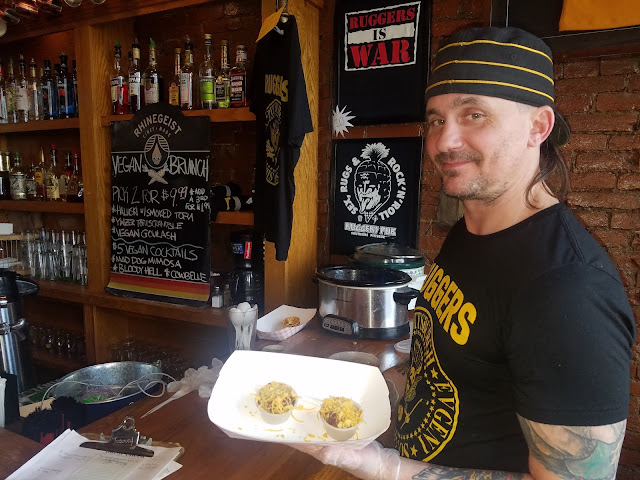 The people that hang out at Ruggers and the people that work at Ruggers are my people. If I could change one thing about the South Side, I would move Ruggers closer to my home. I love them and their food is so good. They had a smoky beef chili with fire roasted tomatoes. It needed more heat, but it was great. Better than the chili you make at home, you slob. 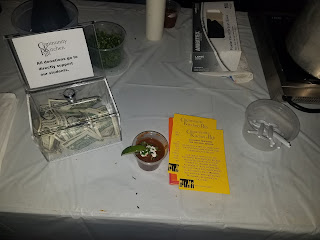 Tiki Lounge. What a place. One time some girl tried to fuck me in the closet on the landing in between the first and second floor. I didn't put out. The same night she left me and found her current spouse. Isn't life a trip?

I wanted to rank this chili higher, it was remarkable. Top round with a mole sauce, great sized chunks of meat. The best meat in the entire competition. They made their chili with no beans, it was awesome. This was one of the finest chilis of the day. Also, they are supporting a great cause. Community Kitchen helps people transition into the workforce after incarceration. If you desire a better world, you should support them.  (Community Kitchen Pgh) 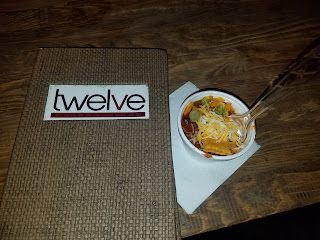 Twelve Whiskey BBQ was my first stop of the tour. Their chili was wonderful, it was made with a blend of brisket and pork and it had a heavy tomato base and light beans. The server told me that it was made by his father, the proprietor of the establishment. This chili was so good it could have easily been in the top three. 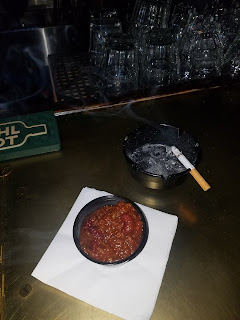 1311 is an establishment that I've been frequenting for many years. It is one of the most fun bars in the South Side and the bartenders are great. Their chili had my favorite spice profile of the day, it was nice and hot and it left my lips tingly and warm. It was a bit heavy on the beans for my tastes which is the only reason I did not rank it higher. The types of meat used to make the chili were unknown to the bartenders.

Apparently the owner of 1311 made the chili and is a well trained cook. Kristi told me that he used to work at a restaurant called Pasta Too in Bethel Park and it is one of the best restaurants in town. Watch out ladies on dating apps, swipe right on me and you might be going to Pasta Too in the near future. 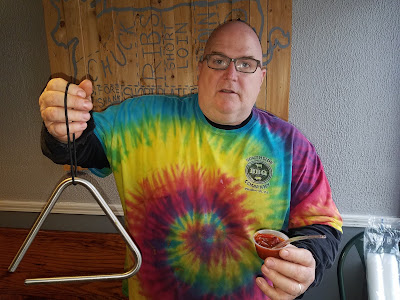 South Side BBQ is a real staple of the neighborhood, we've visited for happy hour in the past. They had one of the more unique dishes of the day as they were serving their smoked brisket chili with a sprinkle of optional ghost pepper dust.  The smoke flavor really came through and the ghost pepper dust added a delightful bite - it really kicked me in the nasal passage. My only complaint is that the chili was too bean heavy and my sampling cup didn't have enough meat! Bonus points for allowing guests to ring the bell if they tried the ghost pepper dust. 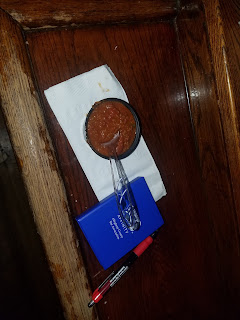 Mario's is always a solid spot. We've been visiting them for happy hour for many years. In case you are wondering, Mario's South Side is better than Mario's East Side and we ran the math to prove it. The type of meat used in the Mario's chili was unknown to our server as the chef had left for the day. I tasted cumin and possibly hot sausage. My chili sidekick Mark described the chili as, "very conventional." He was correct. 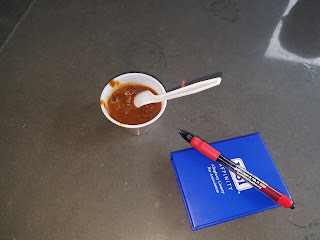 The chili at the flats was made by a bartender named Phil. When I asked Phil what type of meat he used to make the chili he simply remarked, "hamburger." It was nice and tangy, less thick and had a heavy onion base. It wasn't spicy enough and was not bad, but it wasn't great either. Pretty much the standard chili you'd expect if someone invited you over for chili. 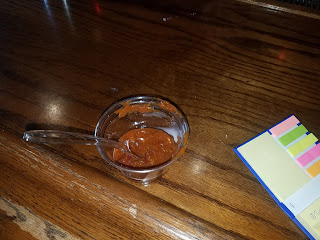 Mike made this chili, he is the owner of Casey's. It tasted heavily of BBQ sauce and more spice was needed. The types of meat used were unknown. Casey's is only ranked at number ten due to having the most handsome bartender. The chili was not good. 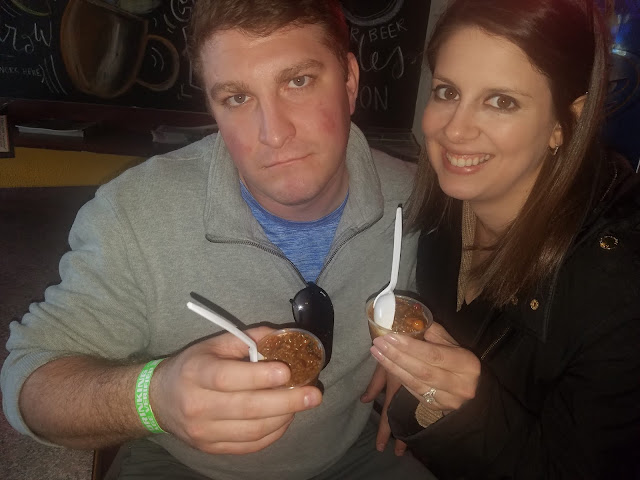 Richie, I love you dawg, but you have to work on that chili recipe. Here are some quotes I solicited from friends. "It tastes like sand." - MB "It tastes like Skyline chili, it would be better on spaghet." - KB

The chili had no bite, no flavor, no rai·son d'ê·tre. One time I left my briefcase at Cupkas I. I called the bar to let them know. I went back to pick it up, explained that I had called in and I had left my bag there. The bartender looked at a note on my briefcase and said, "story checks out." I saw the note, it said, "a guy left this here." 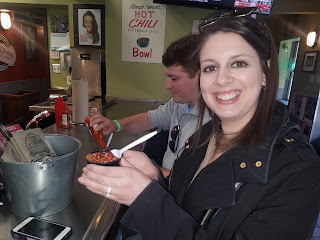 Primanti's served their standard chili. I'll preface by saying that I generally like their chili, but it was lukewarm when we arrived. It wasn't great, I didn't finish it. Also, too heavy on the kidney beans for my tastes. You have to show up for competition day Primanti's!!! The whole city is behind you. 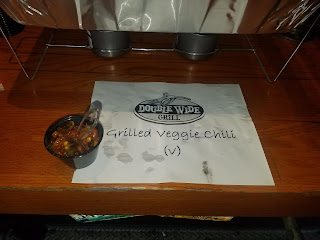 Double Wide used to have great food. Once upon a time I recommended that people go there.  Oh, how giants fall. Terrible chili. The women seemed to like it though. Do you really think you can win a chili competition with vegetarian chili? I would venture to say it is possible, but not with this slop. 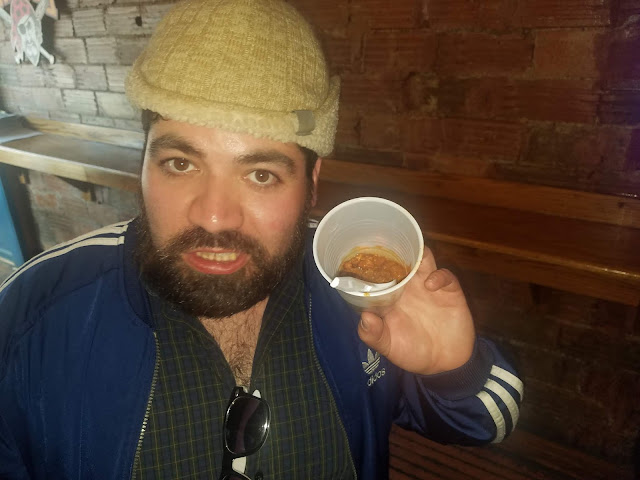 First of all, Archie is the man. I love his chicken wings and everything I've ever been served at Archie's is awesome. However, the chili is not good.

Arch, I think your batch towards the end of the competition might have been burnt. Something was certainly off. We didn't finish our chili and we snuck out the door like shy children. Afraid to tell pap pap that the chili was bad. 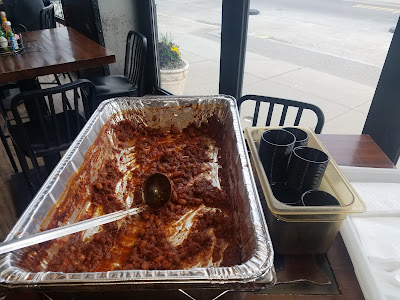 The only reason that Steel Cactus didn't finish dead last is that somehow their sister restaurant just barely managed to make a worse showing. This chili was both burnt and ice cold. A true disappointment. I told the hostesses that if this was how they were going to compete they might as well not compete at all as they were just making themselves look bad.

We've been to Steel Cactus before, I don't recommend it highly, but the specials are pretty good. #sadmex 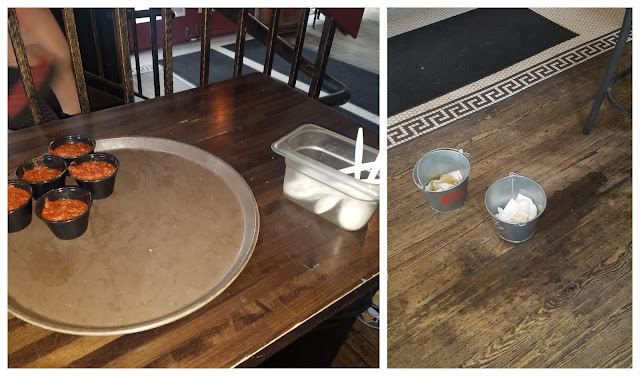 This was absolutely the worst chili of the day. It was served ice cold and was completely lacking in flavor. I could not taste any seasoning. I would compare this chili to unseasoned Italian red sauce with beans. The only reason I'm ranking this chili lower than Steel Cactus is that it was served next to a dripping ceiling and there was no indication that a chili competition was even occurring as there was not a crock-pot on site nor a dedicated server. Just 5 cups of ice cold chili sitting out under a dripping ceiling. Quite frankly, it might have been the same chili that was served by Steel Cactus as the restaurants are owned by the same folks.

I do not mind going to brunch at Local as I love their upstairs patio. However, if you've been following my posts you would know that they served me raw chicken wings several years ago. This chili gets a 0/10,

I met a couple when I started the chili competition at my second stop. They told me that they had made almost every stop but they avoided Local because they thought it would be a waste of time. They sure were right. 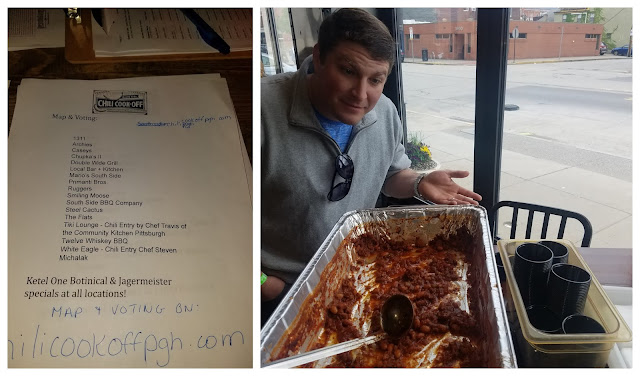 Overall, it was not a bad run for a first attempt by the show-runners. I have a litany of complaints I won't bore you with, but the main two are that they should have provided guests with printed hand outs of the locations and they should have ensured that participating bars weren't fucking around. Totally worth the ticket price though, great job!

Posted by Pittsburgh HappyHour at 5:25 AM