Food Trends Are a Bunch of Crap

I personally think food trend lists are pretentious nonsense. Every year I read them expecting to see something that makes sense and every year I'm severely disappointed. These lists are totally arbitrary. Here's my food trend prediction: people will continue to consumer beef, poultry and snacks at alarming rates. Taco Bell will also continue to be delicious. I'd say that prediction is better than anything you'll find out there in the food trend world. Although the food experts occasionally get things right, sometimes they miss the mark all together.

Here are a few food trends from over the last few years that never really made it:

1.  In 2007 Epicurious predicted that farmers would become the new celebrity chefs.
Epicurious decided that in 2008 we would be seeing the rise of the celebrity farmer due to the plethora of celebrity chefs already on the landscape and the public's desire to know the source of their food. Sorry Epicurious! While celebrity chefs like Gordon Ramsay and Anthony Bourdain are still household names, the television show America's Next Top Farmer is not exactly a concept that ever came to fruition. Our favorite celebrity farmer is still Taylor Swift, who actually grew up on a Christmas tree farm in Pennsylvania.

2. In 2008 SF Weekly said that we'd all be enjoying Mexican-Italian hybrid dishes.
Just imagine the possibilities. Lasagna tacos, spaghetti ranchero or even red wine flavored horchata!  Does all of that sound disgusting?  The general public feels the same way and this is why taco pizza is the only Mexican-Italian dish that continues to reign supreme. Maybe Mexican-Italian caught on briefly in San Francisco, but the rest of us still prefer to eat our Taco Bell on the way to Pizza Hut.

3. 2012: the year of home sous vide?
Have your friends just been dying to have you over to their place to try out their new sous vide machine? Huffington Post says that they were supposed to, back in 2012. Although the prices of sous vide machines may have come down over the last few years, we don't think this appliance will ever reach the popularity achieved by the George Forman Grill. Better luck next year Huffington Post.

4. The Food Channel said we would all have outdoor kitchens in 2012!
The Food Channel claimed that full outdoor kitchens were becoming the new food trend in 2012 and that people were justifying the expense by staying home to entertain more often. Wow! I guess the Food Channel didn't hear that the economy was still hurting back in 2012. Although an outdoor kitchen sounds amazing, most of us are probably just wishing we could scrape together the cash to purchase a non-teflon frying pan that didn't come from the Dollar Store.

5. In 2010 you likely indulged in a ton of New Austrian cuisine according to Bon Appetit.
"Want to go to Olive Garden?" "Why no thank you. I only dine at restaurants that carry a variety of new Austrian cuisine to go with my fancy craft beers!" Although it sounds crazy, you have to give Bon Appetit partial credit. The emergence of the pretzel roll within the last few years validates their off the wall prediction that we'd be chomping down on spaetzle every time we decided to order a Miller Lite draft.

Posted by Pittsburgh HappyHour at 9:03 AM No comments:


Uptown is the newest of the Pittsburgh roof top deck bars. They have a friendly and helpful staff, a great view of the city and a really neat space! There is both indoor and outdoor seating as well as a bunch of fancy roof couches. (I bet West Virginia can't brag about any establishments with roof couches.)


I found the menu at Uptown a little odd. Their roof-top menu is different than the downstairs menu and it features seafood, sushi, charcuterie and bruschetta. (Maybe that doesn't sound weird to you , but I think it is a strange selection!)

I highly recommend visiting Uptown to give everything a try and have a few drinks. It is also a fantastic location to host large events such as fundraisers, hootenannies, box socials and couch burnings.

Anyhow, my favorites were the seafood cocktail with shrimp, lobster, crab, mango and pico de gallo as well as the lobster slider with lemon aioli. I'm typically not a huge lobster dude, but I'll always eat it when it is put in front of me. (Kind of like basically every other food ever.)

Now, if you've ever had doubts that popular foods are anything more than current trends based on hype and market demand, consider this. Lobster was so abundant in colonial America that it was considered a poor-man's food. According to History.com, "Dirt-cheap because they were so copious, lobsters were routinely fed to prisoners, apprentices, slaves and children during the colonial era and beyond. In Massachusetts, some servants allegedly sought to avoid lobster-heavy diets by including stipulations in their contracts that they would only be served the shellfish twice a week."

I also would like a stipulation in my employment contract that I will be served shellfish twice a week.

Posted by Pittsburgh HappyHour at 8:42 AM No comments:

This is easily one of the saddest pizzas in all the neighborhoods of Pittsburgh. Last time we visited Tavern 245 in 2011 I was really impressed by the quality of the food. I still think they offer some pretty decent selections, but I think they missed the mark with the pizza pictured above. Some of the dishes I've enjoyed in the past include the Italian egg rolls, the chicken wings and the trio of sliders. I cannot say the same about the pizza of the day.

This "pizza" is what would happen if you took a piece of bread, some mediocre cheese, an unripe tomato and some unseasoned chicken and put it in your toaster oven. Yes, this concoction might sustain you, but it is hardly worth sacrificing several bud lights for in a bar setting. In theory I think this dish could have been fine. However, the execution was poor at best.

Fried cheese is one of those dishes I almost never comment on as I feel that I am served generic Sysco brand frozen cheese sticks about ninety-five percent of the time. Tavern 245 is part of the five percent exception! These hand breaded cheese sticks were fantastic.They were further bolstered with a nice serving of vodka sauce. I love vodka sauce and I'm honestly sad that it isn't served more often.

When I was studying for the bar exam some nice lady on a video tape named Paula Franzese claimed her father was the dude who invented vodka sauce while working at a restaurant in New York. However, according to www.thekitchn.com, many food historians credit chef James Doty with the invention of the sauce. In the end it really doesn't matter who invented vodka sauce as long as I start seeing it appear more regularly on my dinner plate.

Posted by Pittsburgh HappyHour at 10:08 AM No comments:


I don't usually drink at family bars. I like to smoke and I have a strong aversion to children who aren't related to me. I think it has something to do with my biological clock. The Bulldog Pub is a good exception to my rule on family bars. It is a real neighborhood bar. (It is actually the only bar in Morningside with the exception of the VFW which is next door.)  When a little town only has one bar, everyone comes out to play.

The age range in the small main bar room was roughly seven to seventy and everyone we encountered was very friendly with a middle-American vibe. It seemed like we could have been drinking in Beaver County. (One of the nice parts.)

My friends in Morningside were really excited for me to come sample the fine food of their favorite neighborhood bar. I tried the fried cheese, the sweet potato fries and the steak wrap. I thought everything was surprisingly good! I don't think I'd make the trip just for the food, but it is easily some of the better bar food in our fine city.

The steak wrap was my favorite. I'd say the most memorable aspect of the wrap was that it was obviously made with fresh tender steak as opposed to the frozen heavily processed junk you can expect to find in many steak wraps.

I have a confession to make. I'm not a wrap guy. With all of the assholes going around trying to avoid carbs, I've made it my personal mission to help the grain farmers of the United States. I want bread. Thick soft full-gluten un-enriched bread. All the time. Everyday.


Everyone loves a new sushi restaurant. Sake in the Southside is the sushi-only component of the larger restaurant chain Saga. The main difference is that Sake does not offer hibachi, but they do offer a variety of hot dishes in addition to sushi.

The main selling point of Sake is the pricing. On Mondays they offer a variety of discounted specialty roles for $7.50. (Please note that they advertise Monday as a half off special, but it is really more of a 32% off special based on the normal pricing.) However, everyday of the week they offer a specialty happy hour menu featuring various appetizers in the $5 range.  I tried the sashimi appetizer (pictured above) in addition to the octopus salad, house special tuna jalapeno sashimi and fried tofu. 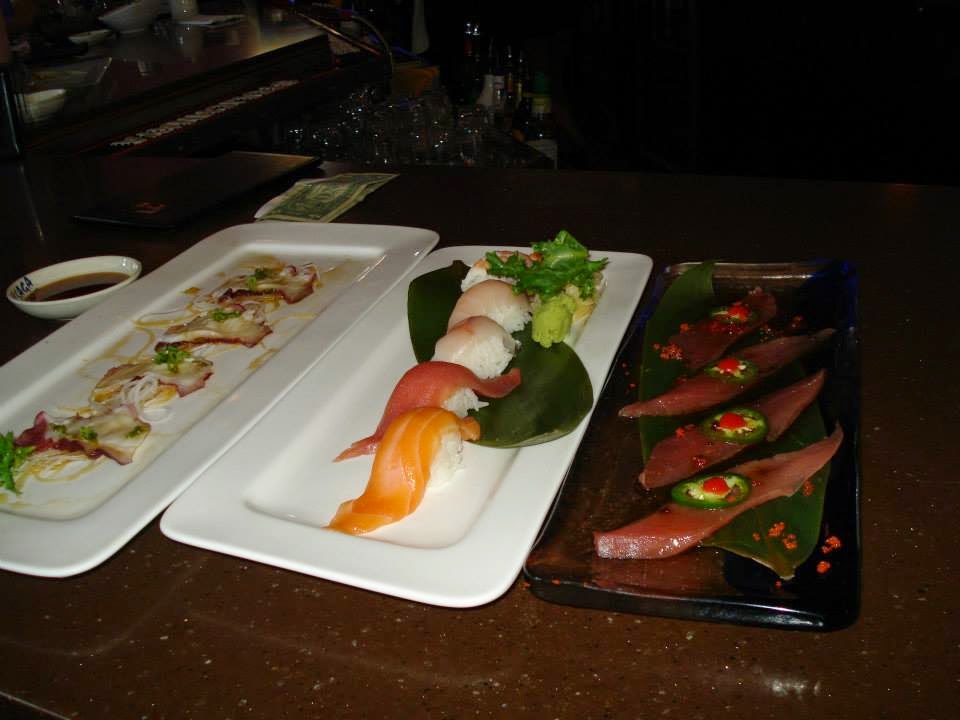 The house special jalapeno sashimi is honestly where it's at. Thinly sliced tuna topped with jalapeno and some siricha. I also really enjoyed the octopus salad. Some items I think you can skip on the happy hour menu are the coconut shrimp, fried tofu and edamame. I'll never ever understand why people go out and order edamame. I just can't grasp why anyone would pay to be served a bowl of steamed soy beans. If you just make the damn things at home you can save the 900% markup you pay to have the restaurant throw beans in a steamer and put them in a bowl.


The high point of happy hour was learning how to take sake bombs, compliments of the house. (Thanks Calven!) I'm honestly embarrassed to admit that I was never taught how to properly do a sake bomb. Here's how it works. You place a shot of sake on chopsticks placed on top of a glass of beer. Someone yells, "sake sake sake" and then you yell, "bomb bomb bomb." After that everyone pounds on the table like an angry samurai and it makes the sake fall into the beer! Amazing, yeah?

Posted by Pittsburgh HappyHour at 8:20 AM 3 comments: