Diamond Market just opened in Market Square, which is quickly becoming the bastion of downtown happy hour mayhem. The establishment is owned by the folks who own Primanti Brothers, and it shows. A lot of the furniture is the same and the general layout and feel of the menu is also similar.

I struggled with the menu. I was trying to explain to a friend recently that I enjoy menus that are challenging. I personally like a menu that has some exotic food options including items I've never tried before and things that I cannot, or have not made at home. We all suffer some form of human weakness. I find that many eaters enjoy routine. They like the same meal, prepared the same way, with genuine consistency. (This is after all how McDonald's became the world's most successful restaurant.) Personally, I suffer from a condition where I desire that which I cannot have.

The Diamond Market menu was not exciting. It looked like a re-tooled Primantis menu minus the traditional sandwiches. Some items that caught my eye included the Pittsburgh poutine and the deviled eggs. Poutine because, well, I've never seen it on a menu in Pittsburgh. Deviled eggs because, well, eww. Despite my reservations towards the menu, I cannot deny that I really enjoyed the one item that I did try. 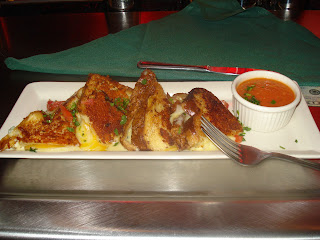 I attempted to tell one of the restaurant patrons that the grilled cheese was out of this world. He laughed at me. Grilled cheese is one of those timeless classics that is really good no matter what, unless you burn it. This grilled cheese knocked me out though. It had a delightfully crunchy exterior due to the use of home-style bread and a parmesan crust. The pairing of internal cheeses was even more delightful - cheddar, gruyere and cambozola. Cambozola was the dominant flavor, a combination of camembert creaminess and gorgonzola punch. I must admit that after being hesitant to eat based on the menu I cannot wait to get back to Diamond Market to see what their other dishes are like.

Also, this place was absolutely slammed for happy hour. We met a nice Japanese man, a Greek who insisted he knew someone in every region of the world and the mayor of Pittsburgh just happened to be there with a giant entourage. Like I said, bastion of happy hour mayhem.

Posted by Pittsburgh HappyHour at 7:06 PM