A Pittsburgher's Guide to Dining in Tokyo 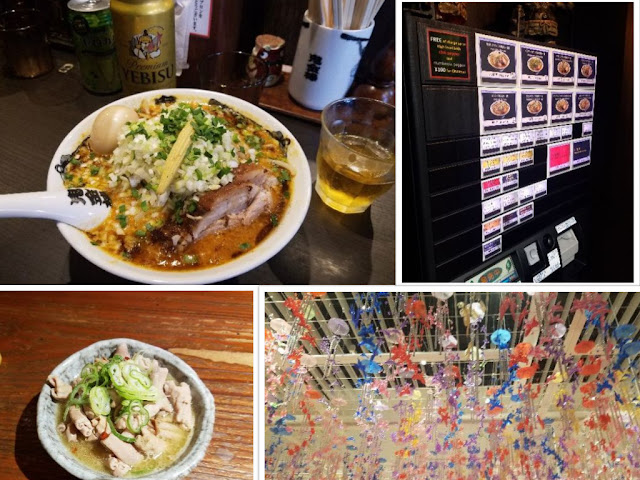 Dining in Japan was easily one of the most unique experiences of my life. Some of my favorite meals were items I stumbled across in the street or in a 7-11. (Yes, 7-11 is huge over there and offers a variety of amazing treats.) Pictured above you can see some ramen noodles from my first day in Tokyo. On the right you can check out the vending machine we used to order our ramen. You place your order and then print a ticket and lunch arrives almost immediately. This particular ramen spot was so good that the nice Canadian man-child behind me in line said that he had already been there three times even though he'd only been in Tokyo a week. I cannot even begin to describe just how flavorful the broth was nor are there words to describe the flavor and texture of the pork. I was also interested to learn that I was unable to order my ramen with roast duck. I guess that is a more Americanized ramen style.

On the bottom left you can see what I believe to be a small bowl of tripe or some other type of sweet bread. It was ordered for me by some very nice Japanese business men who I met on my first night in town. When I attempted to explain that I was a food blogger and asked them to order some snacks for me, they were very amused. They took it as an opportunity to grab and vigorously shake my stomach while yelling, "foooood bloggggeerrrr" in the style of Japanese-English often impersonated by South Park. I cannot be sure if this was due to some type of failed translation or if these men were just extremely amused by my magnificent American belly. 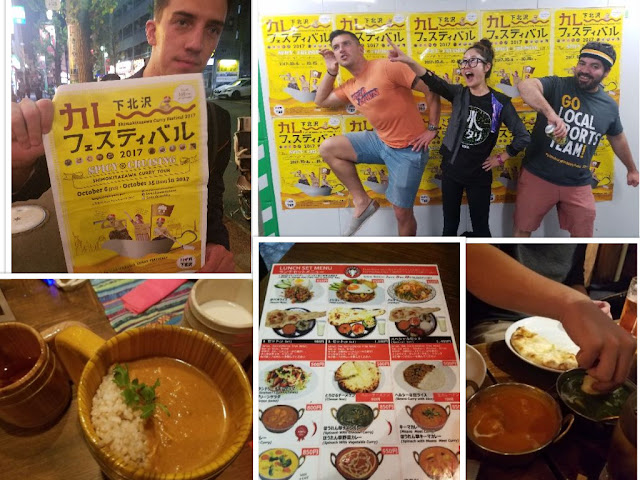 On my second day we ventured to the Shimokitazawa Curry Festival   - it was a magnificent event featuring over 150 restaurants with various types of curry dishes. The tagline for the event is, "Spicy Cruising"  which draws an allusion to a crude reference for a bowel movement.

We sampled a traditional Japanese style chicken and vegetable curry served in a wooden mug as well as curry from a Sri Lankan establishment that served a hot honey cheese naan. (I could eat hot honey cheese naan for every meal.) By the way, if you've been following along with my food adventures you would know that honey on pizza is totally a thing and you can try it out at Spork. 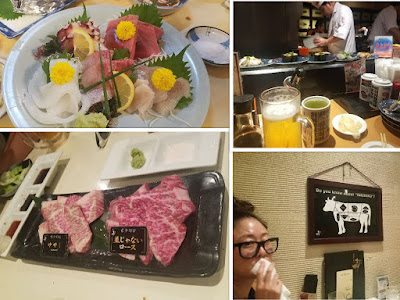 In this photo you can see us sampling some expensive Japanese beef as well as some sushi from two separate establishments. While the yakiniku we visited did not have kobe, there are many different expensive cuts of Japanese beef that are just as good. I'm embarrassed to admit that I do not know the names of the cuts we ordered as one of my AWESOME tour guides was in charge of ordering.  (Maybe someone can translate the placards on the image for me so I can make an update!)

Keep in mind that you have most likely not tried expensive Japanese beef in the US unless you have paid a high premium. Check out my review of Church Brew Works from several years ago that explains why there is no chance in hell that the $11 cheesesteak on a menu described as a ,"Kobe Beef Cheesesteak" is legit. Hell, even if it is wagyu, that's just a waste of good beef.

It's also worth mentioning that I tried nato (smelly fermented soy beans) for the first time at one of the sushi restaurants we visited. I wasn't nearly as disgusted by it as most westerners tend to be, but I won't be clamoring to order it again anytime soon.


Here's a nice photo of us cooking our fancy beef. One of the above food models is an employee of the Irish embassy in Tokyo. One of my favorite moments during my trip was at a Japanese whiskey bar when my friend Naoko innocently asked him if they had whiskey in Ireland. The fucking Irishman nearly shit his pants, it was amazing.

Our fanciest dining experience in Tokyo was at the three star L'Atelier de Joel Robuchon. Quite frankly, I think this was the fanciest meal of my life. We opted for the six course lunch, but we also added a cheese plate and some foie gras because life is just too short to under indulge. One of my favorite dishes was the smoked salmon with gravelax sauce and potato galette. I also quite enjoyed the simmered pork cheek with carrot puree (not pictured) and the roasted lamb with eggplant compote. Every course looked too beautiful to eat.

If you want to hit up a Michelin star restaurant while you are visiting Tokyo, be prepared to call several months in advance. Thanks to our friend Naoko we were able to sneak in to one of Joel Robuchon's restaurants without much fuss, but I doubt they would have let us in without knowing someone. It's also worth noting that you do not need to go to Tokyo to check out a Joel Robuchon restaurant. He has establishments all over the world. In addition to being a freemason, Mr. Robuchon apparently was the youngest chef to ever receive a Michelin star and he currently holds more Michelin stars than any chef in the world. What a fancy dandy.


It's all about that omakase baby. Even as a departed Japan I was able to grab some killer grub at the Narita airport. According to Andrew Knowlton of Bon Appetit Sushi Kyotatsu near gate 34 in Terminal 1 of the airport is the best airport restaurant in the world.  I have to say that I was very impressed by the omakase and I was remarkably excited to enjoy a meal at an airport that was not terrible. I'd even venture to say that it was fantastic.

An interesting note about Sushi Kyotatsu is that the waitress came over at times and explained which items were not to be eaten with soy sauce. She did however provide me with a precious little plate of salt and explained that I could use it on the pieces that were designated as non-soy-saucable. As a true gaijin I can admit that the subtleties of dining etiquette are foreign to me both abroad and at home. Just eat what makes you feel good and do it however you like - that way Japanese business men will come and give you a hilarious tummy rub.


Posted by Pittsburgh HappyHour at 6:18 AM