The first thing that struck me about Social House 7 was the unique name. I found it intriguing and reminiscent of the Vonnegut novel Slaughterhouse Five.

The next thing that stood out was the decor. It is immaculate. I really love how they've made the place up. (See if you can find the koi fish when you walk in.) I firmly believe that Social House 7 was created because someone at the AMPD Restaurant group said, "how can we capitalize on the success of Nakama in the Southside. "

Social House 7 has a more grandiose decor than Nakama and an overall better aesthetic, however, the food is roughly the same in terms of quality.  That is to say - it is not very good. You can check out my 2012 review of Nakama here. I honestly don't think I've been back to Nakama since that visit.

The AMPD group's Steel Cactus appears to be an attempt to similarly capitalize on the success of Mad Mex. When did ideas for restaurants become so scarce? I guess Pittsburgh restaurateurs are running out of steam like the 70's steel industry.

My first concern regarding the establishment was very grave. The girl next to me at the bar ordered a sake and they stated that it could not be done as the sake machine was broken. The bartender's explanation for the lack of sake made absolutely no sense and sent me into a tailspin of panic.

My concerns were confirmed by my $15 white fish carpaccio dish. (Pictured above.) The fish was not cut thin enough to be marketed as carpaccio and the plate was simply too barren for the price point. It is worth noting that I have also had the eel roll from Social House 7 twice and I thought it was perfectly acceptable. This is the nicest thing I have to say.

Previously I had used the spelling of carpaccio from the Social House 7 menu in this review, which turned out to be incorrect. A special thank you to my foodie friend Nik H. for pointing out the error of my ways. (You should be concerned about eating carpaccio at a restaurant that does not know how to spell carpaccio. You should be equally weary of any food blogger that also cannot spell carpaccio.) 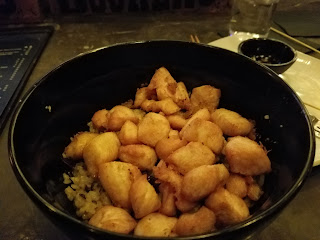 This was my coconut fried rice with fish sauce, cilantro and coconut milk. For an up-charge they will also put some really bad chicken on top of your rice haphazardly. The rice itself was actually pretty good but the chicken was overcooked and tough. (Possibly definitely koi fish.) From my two very brief visits I have to say that the street food seems to outshine the sushi. I will be going back to confirm that this is the case and to see if the giant koi fish in the doorway live through the lingering winter.

Posted by Pittsburgh HappyHour at 4:53 PM