My friend Mark calls Smokin' Joes -  Smokin' Bro's. I do not believe that this title is entirely unwarranted as this is a massively bro dominated bar situated in the historic Southside of Pittsburgh. You can't really fault the bros though, Smokin' Joes has one of the best craft beer selections in the city. Bros love bro'ing down on some craft beers! Their website claims that they have over 60 beers on draft and 350 bottled selections. As an avid PBR drinker, I think all of these selections are expensive and cause confusion, but you can't fault the bro's for bro'ing.

In addition to their highly esteemed bro collection and draft beer assortment, Smokin' Joes offers some fine food specials. On Thursday they have seventy five cent sliders and forty cent chicken wings. The chicken wings are top-middling. The sauces are notable (in particular the smokin' parm) but the texture, presentation and size leave much to be desired. I've heard Smokin' Joes chicken wings called the best in the city many times, I disagree. The wings are often accompanied by a greasy puddle of sauce and I find this to be a turnoff. (But not enough of a turnoff to stop me from consuming all of the wings.) 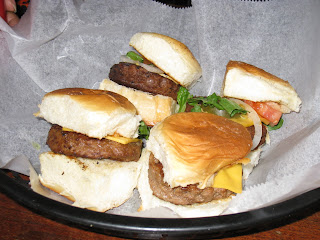 I thought the sliders were just great and appropriately priced. The pork sliders were a bit dry and they could have used some sauce, but the pork itself wasn't that bad. I partially consider this my fault as I didn't realize it was possible to order the sliders with free toppings. Luckily, the waitress brought me a nice basket of pickles and onions later in the evening. The beef sliders were like heavenly little sweet meatloafs. Moist meat, a balanced and sweet flavor with an adequately sized slider patty.  Each one a small angel inevitably leading me to heart disease.

Posted by Pittsburgh HappyHour at 9:09 AM