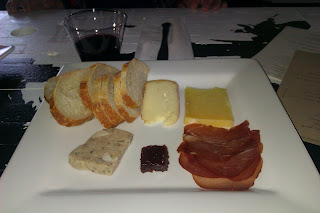 Unfortunately, I have to disagree with my esteemed colleague and fellow Pittsburgh blogger, The Steel Trap. I did not like Bar Marco. The staff seemed to have absolutely no idea what they were doing, the process for ordering food was confusing and the upstairs bar is in a state of disrepair. I only ordered from the meat, cheese and things portion of the menu, but I was very disappointed. The plate pictured above cost $15 or $3 per item. What a rip off!! That small portion of quince jam cannot be justified for $3.

Some of the other various mishaps: I had to ask to order multiple times, there were two different menus and I was originally told the larger menu was not available even though it was, we were not given silverware or napkins, when we were given napkins they were the multi-fold style cardboard napkins that are available in the bathroom at my office, they ran out of glasses and we were served wine in plastic cups, the downstairs bar was incredibly difficult to navigate and loud - when I walked into the restroom it was a stack of cement bags, no toilet or sink and it had a putrid sewage smell.

The space itself has some incredible potential and I think we visited the bar on a day where they were uncharacteristically crowded. I'll make a few other positive notes: the bar does seem to be focused on promoting local artists, which is wonderful, the bartenders were very polite and helpful, they were only charging us $1 for Lionshead beer at the upstairs bar and the other menu offerings do appear very interesting. Hopefully someone will invite me to Bar Marco in the future so that I can give it another try, but for the time being I think I will hold my breath until they work out some of the kinks.

Posted by Pittsburgh HappyHour at 7:18 AM