Jean Louis was one of the best culinary treats that I had the pleasure of experiencing this year. I know what you might be thinking: why would you expect exquisite French cuisine in Dormont?

But you should! Chef Vincent Capuano trained extensively in France but he has all the sensibilities and quirky qualities you could expect from any chef raised in McKees Rocks.  His approach to French dining is totally lacking in pretension. He came across as warm, honest and humble. But his food was remarkable and displayed the qualities that you might expect from a much more unyielding chef.

Our first course was octopus which was extremely fitting as it was the very first dish that Chef Vincent learned to cook. I love octopus and this was some of the best octopus that I have ever tried. It was remarkably tender, well seasoned and served with gorgeous accoutrements. If you could only try one dish at Jean Louis, I would say try the octopus. Based on the article that the City Paper ran it would seem that everyone agrees with me.

Our next dish was this spectacular crab cake. It was entirely unique from any crab cake I've tried as it was not breaded or heavily fried and the dish itself really featured the richness and quality of the crab.  It was almost like a delightful warm crab salad. They used jumbo lump crap from Ecuador. It is worth noting that jumbo lump crab meat is not usually used in crab cakes because it is the more expensive part of the crab. Thanks Jean Louis!

Our next course was the burrata pappardelle with these remarkable mushrooms. When I expressed interest in the mushrooms Chef Vincent actually sent out his sous chef with this absolutely gorgeous box of assorted fresh mushrooms. I'm a huge mycology guy, that's to say - I get really excited about fungus.

Did you know that Kennett Square in Pennsylvania is the mushroom capital of the world? Those lunatics produce over 500 million pounds of mushrooms a year, nearly half the US crop.  With recent changes in legislation in Oregon and other parts of the country I would say that Pennsylvania has a great opportunity to cultivate all sorts of mushrooms.

Throughout the evening we really found the presentation of each dish to be spectacular. This foie gras is the perfect example. I personally adore foie gras. The rich texture lends itself to so many delightful applications.

I find it outrageously silly that there is a move to ban foie gras in some parts of the world such as New York. Despite what the psychos at PETA might think, not all production of foie gras is unethical. In fact many farms are quite transparent about how they treat the geese that are used in the production of foie gras and I would venture to say that if you have a problem eating foie gras you probably shouldn't be eating meat at all. (Disclaimer, I have no disrespect whatsoever for vegetarians. Personally I subscribe to Kantian ethics when it comes to the treatment of animals. The only thing that I find infuriating is when people decide that it is more ethical to eat some animals or some parts of animals than other animals. What a bunch of fucking hypocrites.)

Some of the other dishes we really enjoyed included the scallops and the desert pastries. Personally I would say you can skip the pork belly. It's quite obvious that the staff here takes great care in selecting quality ingredients. Overall this is a remarkable restaurant. I would highly recommend stopping by to pay Chef Vincent a visit. 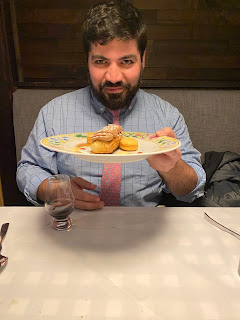 Posted by Pittsburgh HappyHour at 11:20 AM