Sly Fox is a dump. Their beer is just awful, their food is gross and you need a door code in order to use the restroom. If I wanted to use a door code to access the restroom I would hang out in a public park in Europe. Shame on you Sly Fox.

Pictured above are the world famous Sly Fox "chips and salsa." For only $5 (or $2.50 during happy hour) these delicious chips could be all yours. We are talking about some Costco bargain chips served with roughly 2oz of flavorless salsa and way too much sour cream. I cannot earnestly recommend these chips and salsa, even at the happy hour price point. 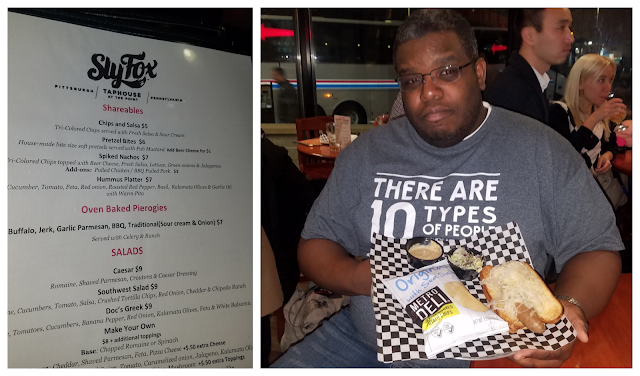 Happy hour at Sly Fox really isn't a bad deal as all of the appetizers and beer are discounted. However, everything kind of sucks so it isn't really a good deal either. Rashan had this sausage for $9. He said it wasn't awful, but I thought it was odd that they couldn't be bothered to bring him silverware or napkins with his meal.

The hefeweizen I tried tasted like bubblegum and the stout I tried was similarly lackluster. I think they should just stop making beer and sell Miller Lite.

The saddest thing about this whole ordeal is that Sly Fox is apparently opening a second Pittsburgh location right by my house. I hope that they learn how to make beer before they open the doors.

I usually agree with City Paper. Their review of Sly Fox says, "Go to the Sly Fox at the Point for the craft beer that’s been around since 1995. Don't expect much from the food." I would politely add that you should also not expect very much from their craft beer.

Posted by Pittsburgh HappyHour at 9:59 AM