Heinz Field - What is your favorite stadium food?

When I was a young child with the tastes of a young child, I simply adored stadium food. There was something about the variety, fat content and excitement of the big game that just made the entire process invigorating. I thought that stadium food was the best food in the world and that everything I had while watching a sporting match was the utmost pinnacle of modern culinary skill - I think I also felt this way about McDonald's.

Somewhere along the way, the dream died. Rather than look forward to stadium food I became nervous about what I should eat before going to any type of event so I could avoid paying $16 for cardboard nachos and a smelly cheeseburger. I think this phenomenon was best described by Graham Linehan who said, "Every time you have McDonalds as a kid, it's a victory. Every time you have it as an adult, it's a defeat." 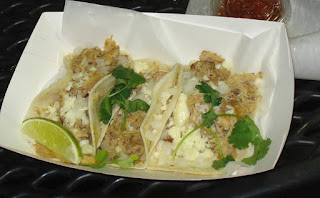 I might have liked these stadium tacos as a child. As an adult, they tasted as bland as a discount frozen burrito and extremely rubbery. Somehow, even the normally pungent cilantro was totally lacking in flavor. I'm pretty sure the chicken was the kind that comes in a liquid solution so that it can simply be slopped into a lousy tortilla shell on game day.