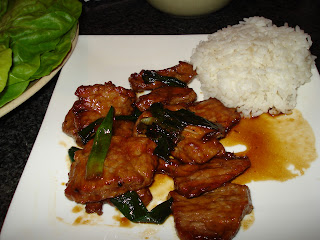 Nakama is a staple of the Pittsburgh sushi/fancy drink community. John K. Means, Jr. describes the bar as, "that place where really trashy Pittsburgh women wearing a ton of makeup attempt to meet sleazy fifty-something men." The food is generally good, the crowd is always jumping and the atmosphere is loud and boisterous. This was the second happy hour where we ran into mayor Luke Ravenstall. I think the mayor is secretly following our Facebook group and he is too embarrassed to join - we must be very sheik and intimidating.

Nakama has a fairly good happy hour special, all appetizers are half off. Pictured above is the Mongolian beef. This was the second time I've had the Mongolian beef in less than two weeks, it was very good. The beef was tender and flavorful and not overly salty. 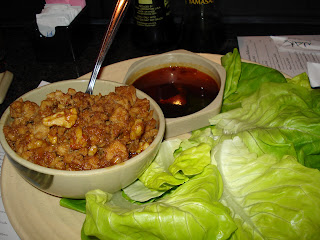 These are the chicken lettuce wraps I sampled following my beef. They were just awful. I had someone next to me give them a taste to make sure I wasn't crazy. They confirmed my suspicions that the chicken tasted like kitty litter. By way of further reinforcement, another happy hour goer also ordered this dish and took one bite before declaring that she thought she was going to be sick. I've heard that this dish is generally pretty good, perhaps Nakama just dropped the ball due to the large Thursday crowd.

The food at Nakama is usually quite palatable. I've always enjoyed the sushi and every dish I've ever had other than the chicken lettuce wraps. It is easy to notice that most patrons aren't in attendance for the cuisine. Nakama is really a see-and-be-seen kind of place. The seating along the front window allows diners to show-off their elite status to other Pittsburghers.  Following my lackluster meal, Gary the dentist introduced me to a girl with the most electric fake tan I had ever seen. One of my friends had no means to describe her other than, "she looks like Simba from the Lion King."

Posted by Pittsburgh HappyHour at 1:54 PM